Dr. Sarah Beaulieu uses Ground Penetrating Radar (GPR) as a remote sensing method in her work as a modern conflict anthropologist. Training at the Canadian Forces Base Borden, she received her certification in 2016 and initially began using radar to search for the lost footprints of Canada’s WWI internment sites as well as in search of unmarked PoW graves. With Dr. Beaulieu’s anthropological background, she has developed a reputation for being able to interpret radar scans in a way that is both culturally sensitive and follows traditional cultural protocols. Through this work, she has liaised with the RCMP in search of clandestine graves and has surveyed both city cemeteries and worked for First Nations communities to survey both Indigenous cemeteries and search for residential school burial sites.

The GPR systems work by emitting a short electromagnetic pulse in the ground through a wide-band antenna. Reflections from the ground are then measured to form a vector. An image is built by displaying these vectors side by side with the displacement of the antenna. By moving the antenna along a line and taking regularly spaced acquisitions, it is possible to construct an image representing a vertical slice of the ground. The GPR system is connected to a laptop computer that displays these images in real-time. The data is also recorded on the computer for later interpretation and processing. 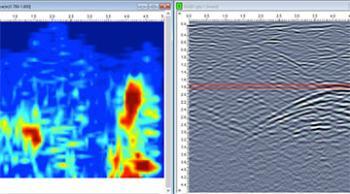 For a better understanding of how the Ground Penetrating Radar system can support archeological discoveries, watch how Dr. Sarah Beaulieu is using it in her work with the Canadian First World War internment recognition fund as she researches the cemetery in Morrissey where internees were buried during the internment operations.