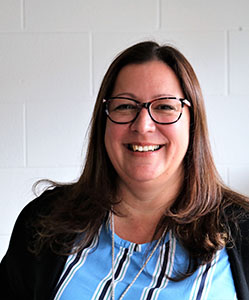 Samantha has been teaching at the post-secondary level since 2001. She has been at UFV full-time since 2007, teaching a variety of Communications courses at all levels. Prior to coming to UFV, Samantha taught in Alberta for two years in the University of Lethbridge's writing program, for Lethbridge College, and for Athabasca University. Returning to her home province, she taught at BCIT for three years before making the switch to UFV.

In her spare time, Samantha likes to get to the outdoors with her family - every year she goes camping with her horses and dogs as often as possible. She also enjoys travel, and she is a former tenor drummer with two world champion bands: the Simon Fraser University Pipe Band and the Boghall and Bathgate Pipe Band in Scotland.

Pattridge, S. (2018). Ratio of out-of-class time to in-class time: A challenge or an
opportunity? Educational Developers Caucus Conference, University of Victoria,
Victoria, BC.

Pardy, L. & Pattridge, S. (2016). Teaching Communications when you have flipped:
Student perceptions of flipped learning in the Communications classroom.
Canadian Association for the Study of Adult Education, Congress 2016,
Vancouver, BC.

Pattridge, S. (2001, May). Weaving a safety net: The benefits of an Inkshedding
classroom. Canadian Association for the Study of Language and Learning,
Canmore, Alberta.