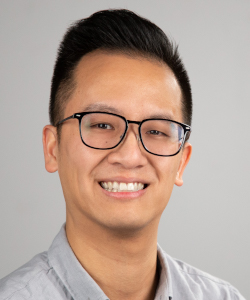 Linus Chang has only been at UFV since 2016, but he has already trained a large number of students in research through opportunities provided by his NSERC discovery grant. He has been actively publishing and making presentations involving many of his students from UFV. His area of research interest in inorganic chemistry may in future have a major impact on the development and use of alternate fuels, biocatalysts, and medicinal chemistry.

Linus graduated from Simon Fraser University (SFU) with his B.Sc. in 2009, then completed his Ph.D studies with Prof. Tim Storr at SFU in 2014. He then moved to sunny California for his postdoctoral studies with Prof. T. Daniel P. Stack at Stanford University studying Cu-containing enzymatic models. He joined the chemistry department at the University of the Fraser Valley in 2016, where his inorganic chemistry research program focuses on bio-inspired catalyst design for alternative fuel production. Interested students are encouraged to contact him directly by email!

Focus: Towards the total synthesis of Yaequinolone J1 and J2

My research program will revolve around investigating the sustainable generation of renewable fuels catalyzed by inorganic coordination compounds. Inspired by enzymes such as [FeFe]-hydrogenase and photosystems, we will design inorganic coordination model complexes that catalyzes alternative fuels (i.e. hydrogen) production under reducing conditions. These compounds can be tuned through systematic electronic or structural modifications, and the required reducing equivalents will come from an electrochemical or photochemical source, where the latter represents a key goal of this work: To generate alternative fuels, such as H2, using the most abundant energy source on our planet.