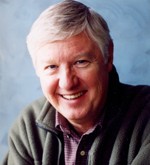 Ian was the founding member of the UFV Theatre Department (1980) and served as Head for twenty-seven years (1980-2000, 2003-2010) guiding the development of department curriculum, staffing, programming, scholarships, and facilities.

Ian taught at all levels of the program focusing on studio courses in acting, directing, playmaking, and the upper level lecture-based History of Musical Theatre. He has taught in Japan for Takushoku University and has conducted workshops for Theatre BC. His creative practice included directing more than fifty productions for the department since 1980. Ian has directed newly commissioned scripts, many Canadian plays, musicals, and twenty Shakespeare plays. Some of his productions are: Age of Arousal, Once in a Lifetime, As You Like It, A Funny Thing Happened on the Way to the Forum, A Midsummer Night’s Dream, Hamlet, and Canterbury Tales: The Pilgrimage of Geoffrey Chaucer. Ian also worked as a dramaturge on play development. Among the plays he has helped develop are: The Play’s the Thing (site specific), Mr Big and Tall, Droning of Bombers, Ready to Start, Canterbury Tales: The Pilgrimage of Geoffrey Chaucer, The Nun’s Priest Tale, Medicine, and many others.

Ian received two UFV Outstanding Achievement awards for his creative work: for a decade of extraordinary Shakespeare productions; and for developing and coordinating The Directors’ Theatre Festival. He is also the recipient of multiple Paul Harris Awards.

Prior to joining UFV, Ian was a founding member of Touchstone Theatre in Vancouver.