The list of SASI students below have either been awarded the Undergraduate Research Excellence Award by the Office of Research, Engagement and Graduate Studies at UFV, or have been awarded other UFV Scholarships related to South Asian Studies or the SASI.

Each year, the Research, Engagement, and Graduate Studies office hosts a celebration dinner to honour excellence in research done by undergraduate students at UFV and to acknowledge faculty research supervisors. Faculty from each discipline are asked to nominate one student to receive the $1,000 award for outstanding research done as a research assistant or as part of a course or work study program.

Anecia Gill was awarded the URE for her research excellence in creating a Social Studies 10 Lesson Plan in conjunction with the 2014 play on the Komagata Maru story that the CICS commissioned. Read our article for more details. 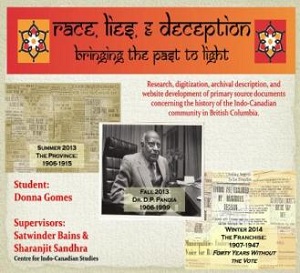 Donna researched primary source documents, the historical context of those documents, and created digital access to them. In the summer of 2013 I worked with a collection of 250 newspaper articles from the Vancouver Province published from 1907-1914. In the fall of 2013 Donna worked with a collection of over 350 documents belonging to Dr. D.P. Pandia, an Indian lawyer who travelled to Canada in 1939 and advocated on behalf of the South Asian community in B.C. He successfully fought against threatened mass deportations 1939 and worked to secure the federal, provincial, and municipal vote for South Asian immigrants in 1945-1947. Donna arranged the physical collection, digitized the documents, and created archival descriptions for each item. In the winter of 2014 Donna's final project has been to create a website showcasing the research done by the CICS, including a site devoted to research on the franchise, from 1907-1947, based on the primary source documents she worked with over the previous semesters. 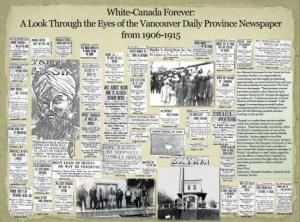 White-Canada Forever: A Look Through The Eyes of the Vancouver Daily Province Newspaper 1906–1915

Where some posters were filled with graphs and lengthy text explanations, Shea Wind’s posterboard was instead filled with photocopies of newspaper headlines.

“This is pretty much a representation of what I did for the Centre for Indo-Canadian Studies in the fall semester,” Wind said. “I transcribed articles from the Vancouver Daily Province newspaper, focusing on Indo-Canadian immigration to British Columbia and the racism that arose from that.”

These racist undertones are easy to see in the headlines he’s picked out to include as part of the presentation: The headline “Will Arrest Hindu Who Is Alleged To Have Voted” stares at the viewer in all caps, and suspicion seems to be a prevalent theme.

“There are definitely some stories that shock you, that this could happen in the last 100 years. It shows just how brutal British Columbians could be to outsiders during this time period,” Wind noted.

This project was one he undertook while working for the Centre for Indo-Canadian Studies last fall.

Parveer Singh Ghuman worked for the Centre for Indo Canadian Studies in July 2012 as a student intern from Panjab University. Ghuman is a student of Law at Panjab University in Chandigarh, India. This paper is  his work on human trafficking under the supervision of Professor Yvon Dandurand of UFV.‌

Saman worked at the Centre for Indo Canadian Studies on one part of a comprehensive 100 year South Asian History project. This project has undertaken to interview pioneers (or their descendents) in order to record oral histories that have previously never been recorded. This project has been breaking down the barriers that exist in Canadian history that is largely silent on the contributions, trials and tribulations of immigrants from India at the turn of the last century.

Saman transcribed and narrated the interviews that the Centre has been collecting and undertaking for the last five years. 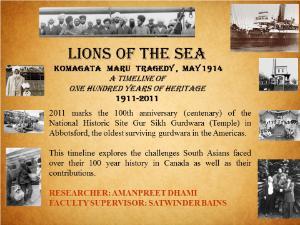 Amanpreeet Kaur Dhami created an extensive timeline looking at the history of South Asian migration to Canada from 1904 to the 1950's.